A monster shift is happening..Monster Sushi 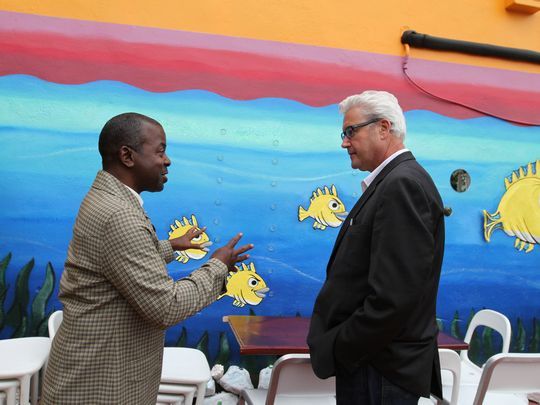 There is a “monster shift” in the landscape in Morristown. Expanding on the success in New York City and formerly of Summit, Monster Sushi has selected 5 Pine St. in Morristown as its next destination.

On Le and his wife Nhu Bui-Le started the business in the Chelsea district of New York in 1997 and say they are excited to expand into the Morris County area.

The oversized menu is filled with many options for sushi lovers as well as those who want to try items other than sushi.

The rolls are what Monster Sushi is known for — with lots of creativity. The Unbelievable Roll ($13.50) arrives to your table shaped like a pyramid. It’s filled with eel and avocado include topped with spicy tuna, tempura flakes tobiko and scallion.

If you feel like celebrating the Mets making it to the World Series, or if you just love soft shell crab tempura, you can order the World Series Roll ($14.50), which along with the crab, is topped with tuna, eel and avocado.

If you are feeling adventurous, there’s such unique appetizers as Usuzukuri ($16.50), thinly sliced whitefish served with ponzu vinegar sauce, hot pepper, chopped scallions and grated white radish. A combination version of the same can be made with tuna and whitefish ($18.50)

One of the most stunning rolls, which arrives to your table looking like a rainbow due to the multi-colored flying fish roe, is the Godzilla roll ($10.50). When you’re done admiring the beauty, you will taste the combination of spicy tuna with avocado topped with that brightly colored flying fish roe.

Want something other than sushi? The menu is filled with other items including a selection from the Hot Pots. Japan’s most famous international dish, Sukiyaki ($16.50 lunch, $18.50 dinner) arrives to your table steaming with thinly sliced beef, bean curd, vegetables and konnyaku (yam noodles) served with sukiyaki sauce. Yosenabe ($16.75 lunch, $19.50 dinner), meaning a gathering of everything, has shrimp, scallops, fish, bean curd, vegetables and a konnyaku in broth.

Traditional Bento Boxes are served for both lunch ($14.99) and dinner ($18.99) where you can choose from Teriyaki, Tempura, Katsu, Katsudon, Sushi or Sashimi as the main course. This art in a box also includes soup, salad, rice, choice of Spring Roll or Shumai and choice or California, Tuna or Salmon Roll.

Morristown Mayor Timothy Dougherty attended a recent grand opening ribbon-cutting ceremony at the new establishment. “It’s great to see Monster Sushi join the restaurant and art scene in Morristown,” said Dougherty, emphasizing the enthusiasm the town has for this expansion.

Highlighting the impressive food, Alison Deeb, a councilwoman in the fourth ward, says she “loves the Monster Roll.” As a further nod to the quality of the experience at Monster Sushi, Deeb recently celebrated her anniversary here.

In addition to the innovative sensations for your palate, Monster Sushi has also added to the visual landscape of Morristown. This summer, landlord Steve Newmark was standing outside the property, which was to become Monster Sushi. He was wondering what he should do with the large empty outside wall. At that moment Morristown artist Ron Ritzie was biking past and stopped to talk to Newmark. When Newmark explained his dilemma about the wall, Ritzie suggested, “Why don’t you paint a mural?”

The 3-D mural of brightly-colored fish uses LED paint that makes it iridescent and come alive at nighttime. Ritzie is a long time member of the community and wanted to make this a community-based effort. He enlisted the help of two apprentices, Kevin Bass and Zach Thompson, as well as children from the Morristown Neighbor House.

“I’m very happy the customers enjoy our food,” said owner On Le. “We have many repeat customers. They keep coming back.” Nhu Bui-Le added that they are very busy on weekends, especially pre-theater. If you’re dining before a show, call ahead for reservations.

Don’t forget to check out the monsters behind the sushi bar, including Godzilla.